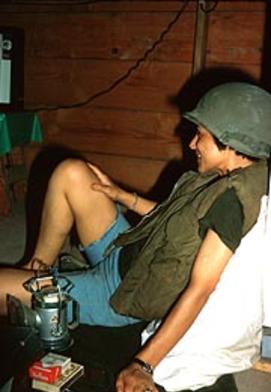 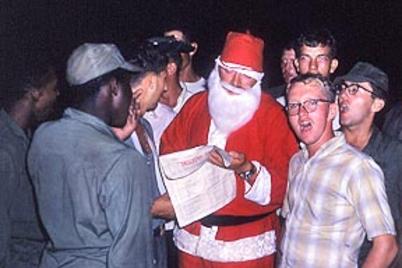 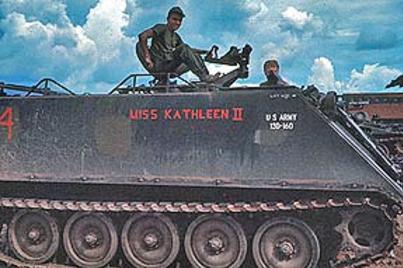 There was always a bit of humor, even in the worst of times. The OR supervisor, who loved San Francisco, talked endlessly of going back. Mindful of the Scott McKenzie song, someone gave her a flower to wear in her hair. During one heavy mortar attack, we couldn't account for one of the nurses. I ran to her hooch and found her watching a small black-and-white television she had just received. She growled, "I'm gonna watch this, and no @$%& VC or mortar attack is going to stop me." 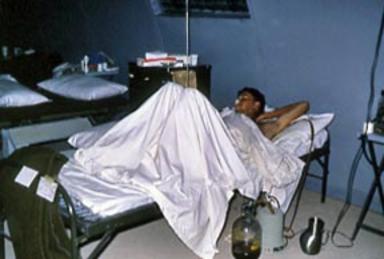 While we were dealing with the wounded soldiers, the hospital was taking its own hits. We were subject to frequent mortar attacks and occasional rockets. Nurses sometimes wore helmets and flak jackets in the OR. If you weren't needed, you tried to get to a bunker. If you had a patient on the OR table, you pulled him to the floor and placed your body over his.

Operation Cedar Falls involved some 16,000 American troops and perhaps 14,000 ARVN (Army of the Republic of Vietnam) soldiers. If they thought they could destroy the tunnels and conquer the Viet Cong, they were wrong.

Within hours the 12th Evac started taking in mass casualties from places with names we would learn to dread. They included the HoBo Woods, the Boi Loi Woods, The Fil Hol Plantation, and the Michelin Rubber Plantation.

Nurses wave to soldiers from outside their hooch.

Christmas was a time of great celebration, especially since the day was declared a cease-fire from the war. Nurses decorated their hooches and enjoyed goodies that their families sent them, including a balsam fir sprig and a tape recording of a crackling fire. Enlisted men raised everyone's spirits by caroling throughout the camp.

Soldier on a ward that would soon be overfilled. 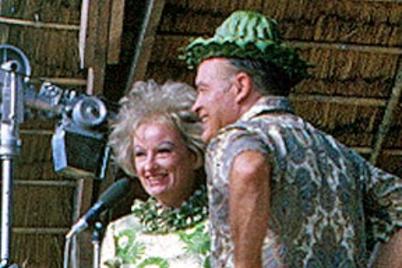 Taking cover in a bunker. 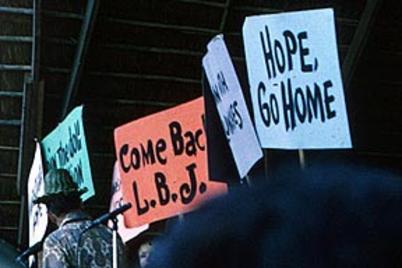 We never knew who was friend or enemy. 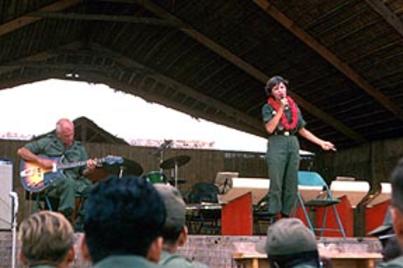 12th Evac After the Holidays​​

One of the highlights of my year in Vietnam was the Bob Hope show, which included Phyllis Diller, Vic Damone and a host of other celebrities. The extravaganza was held at the Cu Chi base camp on December 25 (Christmas), 1966, to celebrate the 25th anniversary of the 25th Infantry Division, and it took place just two days before my 25th birthday. We later learned that while we were enjoying the Bob Hope show in the open air, the Viet Cong were holding their own celebratory event in a tunnel beneath our base camp. 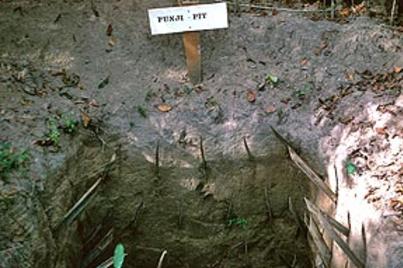 Tank in convoy on its way to the Iron Triangle.

1/Lt Beth Parks in front of one of the OR Quonsets.

Frustration with war sometimes brought out creativity. Nurses who tried to make things homey put up a white picket fence around their hooches. Soldiers often named or decorated their aircraft, tanks and weapons.

Such big-name performers as Martha Raye periodically entertained the troops and helped them take their minds off the horrific situations in which they found themselves. 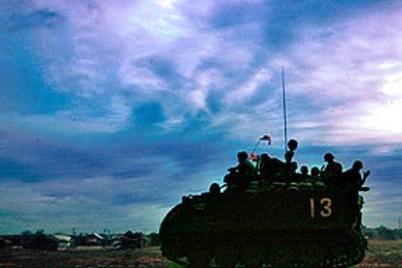 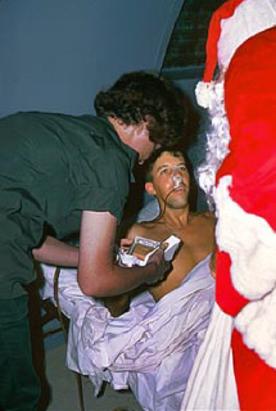 Martha Raye performs for the troops at Cu Chi. 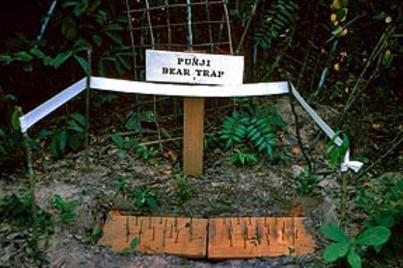 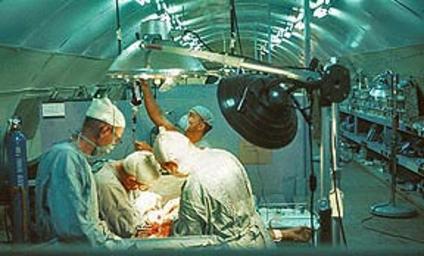 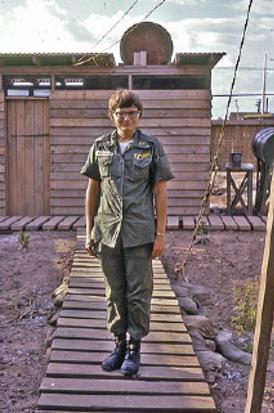 The 12th Evac After the Holidays

The holidays were a wonderful respite, but the war started up again with a vengeance when Operation Cedar Falls began on January 8, 1967. An enormous convoy of tanks and trucks rumbled past the hospital in the evening on their way to the infamous Iron Triangle, a Viet Cong stronghold that lay just northeast of Cu Chi. Their mission, along with that of air support, was to destroy the massive tunnel complex and Viet Cong stockpiles.

At the beginning of Cedar Falls, which would later prove to be the largest ground operation of the entire war, a festive mood permeated the air. Shouts and cheers rang out as if the men were heading off to some extraordinary football game they were sure they would win.

As at the 7th Surg, most wounds came from fragments propelled by land mines, grenades, and booby traps that exploded when a wire was tripped. Non-explosive devices often featured camouflaged stakes or nails smeared with human feces. Hand-to-hand combat was unusual, and most soldiers never saw their enemy. Even "tunnel rats," generally men of small stature who could fit it the narrow tunnels, encountered more booby traps of spiders and poisonous vipers than they did Viet Cong soldiers.

Wounded soldiers were brought to the hospital in a never-ending stream of ambulances and UH-1 Huey "Dustoff" MedEvac helicopters. Scrub nurses often served as the surgeons' assistants. Soldiers who needed to be transported to larger hospitals were sometimes evacuated by the big twin-engine CH-47 Chinook helicopters. 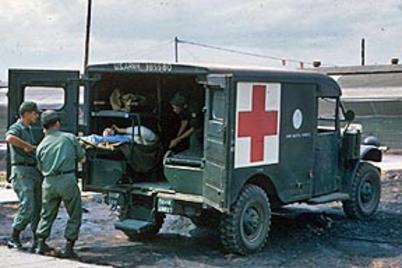 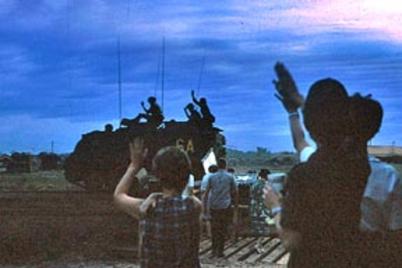 OR nurse Annie Cunningham in flak jacket and helmet. 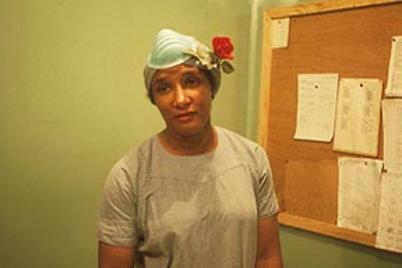 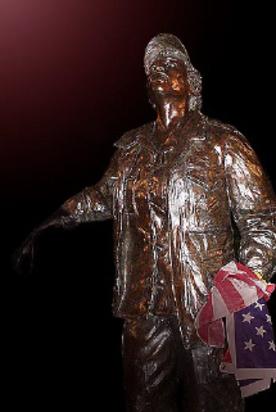 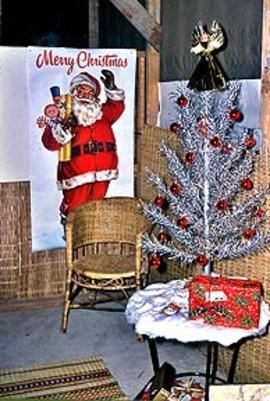 Casualties began coming into the OR early the next morning. 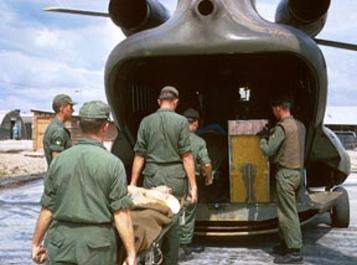 Trap closed inward and drove nails into a foot or leg. 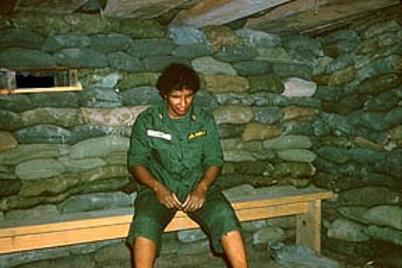 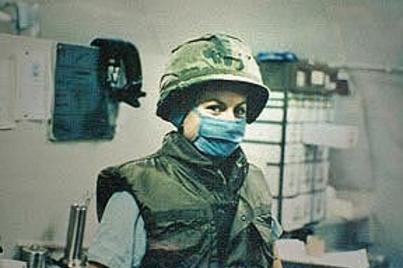